By Khosrow B. Semnani, for The Washington Times. Published: December 18, 2019 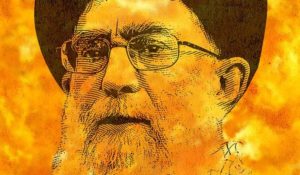 In his 2017 historic speech before leaders of more than 50 Muslim nations gathered in Riyadh, Saudi Arabia, President Donald Trump reset U.S.-Iranian relations by declaring his solidarity with the Iranian people. The president concluded his address with a prayer for “the day when the Iranian people have the just and righteous government they deserve.”

With thousands of Iranians pouring into the streets on Nov. 15 to protest a three-fold hike in gasoline prices, the president’s remarks about the Iranian people have assumed an urgency that we ignore at our peril. Having plundered Iran’s oil wealth and bankrupted its economy to advance a vision of Islam as a militant ideology, the country’s leadership has upped its violence against the Iranian people. The scale and scope of the regime’s crackdown was concealed by an unprecedented nationwide Internet blackout.

On the fourth day of the protests, Nov. 19, the U.N. High Commissioner on Human Rights, Rupert Colville, warned that protests on the scale in Iran are an indication of “deep rooted and well-founded grievances that cannot be brushed aside” and called on Iranian authorities to respect its citizens’ freedom of expression.

Amnesty International confirmed that at least 304 people had been killed. Brian Hook, the U.S. Special Representative for Iran, claimed that “the regime could have murdered over 1,000 Iranians since the protests began.” The video footage speaks volumes about the regime’s criminal intentions and actions — with hundreds of unarmed protestors being shot at from rooftops and helicopters and others even being shot at point-blank.

Michelle Bachelet, the U.N. Human Rights Commissioner has stated that “at least 7,000 people have reportedly been arrested in 28 of Iran’s 31 provinces” and expressed “extreme concern” about “their physical treatment, violations of their right to due process, and the possibility that a significant number of them may be charged with offenses that carry the death penalty.”

Sadly, many Iranians have come to doubt the validity of the United States’ promises. And for good reason. In 2009, with millions defying Iran’s supreme leader to protest rigged elections, the Obama administration chose to sacrifice America’s ideals for political expediency. Indeed, the Iranian people were sold short. The promise of Iranian democracy was sacrificed on the altars of the Iran nuclear deal.

Instead of condemning the country’s supreme leader for nuclear blackmail, the United States capitulated by bribing him. The Iran deal was branded as diplomacy and sold as the only alternative to an Iran war. Then-Secretary of State John Kerry’s photo ops with Iranian Foreign Minister Javad Zarif sent a clear message: The United States did not hear, see or stand with the Iranian people.

The 2015 Iran nuclear deal was premised on upholding a lie — a strategic disaster — that future Iran deals promise to resurrect. Instead of challenging the legitimacy of an ayatollah who rules Iran because of a mere 60 votes cast by his cronies in 1989, the United States became complicit in a deal premised on recognizing the peaceful intentions of a theocracy that, in practice, murders and massacres its own people. In the name of avoiding conflict, the United States recognized an ayatollah who puts a blade above the ballot box, a bullet in the U.N. Charter and a bomb above all humanity.

The time for a nuclear deal has come and gone. To seek another agreement with the ayatollah is to repeat Mr. Kerry’s failed diplomacy. It is to sanctify a strategic miscalculation that will enable Ayatollah Khamenei’s bankrupt kleptocracy to wage a war against the Iranian people and to destabilize the region for decades to come.

What they seek is life, liberty and dignity — nothing short of the restoration of Iran’s independence, standing and sovereignty. And for that to happen, the United States and its allies must hear and heed the Iranian people’s message. For their dreams to take flight, the ayatollah must go.

The day President Trump prayed for in Riyadh is about to dawn in Iran. And so the Faustian bargain presents itself once again: Do we really stand with the Iranian people or will we seek a deal with the ayatollah?

Khosrow B. Semnani is an Iranian-American industrialist, community leader and philanthropist who resides in Salt Lake City, Utah. He is the author of “Where is My Oil? Corruption in Iran’s Oil and Gas Sector.”