SALT LAKE CITY — An iconic Salt Lake Valley property is commemorating the anniversary of one of its historic landmarks.

Owners of Trolley Square on Monday are celebrating the 110th anniversary of the first electric streetcar leaving Trolley Square for public transportation service on Oct. 15, 1908. Following years of service in city transit, the trolley car then served as a reminder at Trolley Square for years until it was removed in March 2010.

The trolley car is being moved back by crane and tractor-trailer, where it will be placed, unveiled and restored for the community to enjoy for years to come, according to Trolley Square general counsel Taymour Semnani.

“The previous owner stored it under some tarp and some trees,” he said. “This is an opportunity to reintroduce the trolley car and get it back to Trolley Square so people can enjoy it again.”

He said the water tower and trolley car are venerable Salt Lake City landmarks that residents respect and appreciate. Having them both back on the property will usher in a new era for the historic parcel, he added.

Since being acquired by developer Khosrow Semnani in 2012, Trolley Square has been the subject of efforts to revitalize the surrounding Central City neighborhood. Most recently, plans for a major six-building development on the block directly south of Trolley Square have been submitted, in addition to upgrades to the existing retail and entertainment center, he said.

“On April 17, we announced a repositioning of Trolley Square in both the Salt Lake and regional market to be a Class A development,” Taymour Semnani said. “The first component is the multifamily development slated to be on the south lot, the second component is a renovation of the main property to upgrade lighting and signage to make them consistent with what’s going in across the street at the multifamily development while completely preserving and enhancing the history of the property.”

Read the rest of the story at Deseret.com 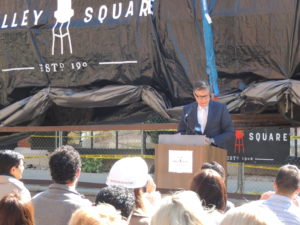 Khosrow Semnani speaks at the return of the Trolley Car to Trolley Square. Photo by Michael De Groote