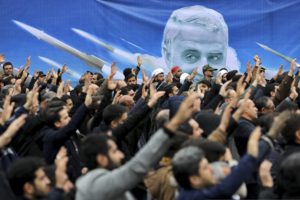 A year ago, President Donald Trump wrote of his support for the Iranian people’s basic economic and political rights.

“The great Iranian people have been repressed for many years,” he tweeted. “They are hungry for food & for freedom. Along with human rights, the wealth of Iran is being looted. TIME FOR CHANGE!”

Trump has consistently spoken of his support for Iranians and his opposition to the theocratic dictatorship that subjugates them.

“The Iranian regime’s longest-suffering victims are its own people,” he said in a speech in Saudi Arabia to the leaders of more than 50 Muslim nations. “Iran has a rich history and culture, but the people of Iran have endured hardship and despair under their leaders’ reckless pursuit of conflict and terror.”

As an Iranian-American who was born in Iran and moved to Utah in the mid-1960s, I appreciate the president’s acknowledgement that there is a difference between Iran’s unbearable dictatorship and its oppressed and suffering people. This is no small thing for a politician to admit.

Many, including President Trump’s former National Security Advisor John Bolton, had argued that the best way to end Iran’s nuclear ambitions was to simply bomb Iran’s nuclear sites — including an operating nuclear power plant in Bushehr, Iran. As I proved in my report, “The Ayatollah’s Nuclear Gamble,” such an act would result in tens of thousands of innocent Iranians’ deaths. It seemed so odd to me that people can casually ignore civilian casualties while advocating the intentional creation of a middle-eastern Chernobyl.

Unfortunately, a different sort of disaster now threatens both Americans and Iranians after Trump ordered the drone strike against Iranian General Qassem Soleimani. Soleimani was indeed a mastermind of death and instability in the region and many Americans have died because of initiatives he led. He was the right-hand man of Ayatollah Ali Khamenei, the supreme leader of Iran and was actively operating to end not only American interests in Iraq, but also American lives. In the same way the United States eliminated Osama bin Laden and ISIS leader Abu Bakr al-Baghdadi, Soleimani ended his career by America’s decisive military action.

But was this a good decision?

Simply saying that he was a bad guy and deserved what happened to him is not enough justification in the real world where sociopolitical conditions can spin out of control. Certainly, some may argue, as former CIA director and retired Gen. David Petraeus has, that the killing was “a very significant effort to reestablish deterrence.” But is a temporary “deterrence” part of a permanent path to peace?

Merely ramping down the regime’s more blatant attacks against Americans will not end its ambitions. And the accidental downing of a Ukrainian airliner by Iranian missiles — with 176 civilian deaths — is a reminder of the unintended consequences of military strikes. Risking a broader and more direct war will not bring anything more than unnecessary suffering. There is a better way that falls more in line with Trump’s professions of friendship toward the Iranian people.

Partly due to U.S. sanctions, the Iranian economy is in a deep recession. Unemployment is 16.8 percent. Oil revenues are expected to contract by 70 percent. The Rial has lost 70 percent of its value. The cost of living has risen more than 40 percent. Protests have been growing throughout the country. The people are tired of how the regime focuses on foreign interventions instead addressing economic conditions of its people. They know the regime is corrupt to the core and using crisis to cover up their theft of oil profits as I discussed in detail in my report “Where Is My Oil? Corruption in Iran’s Oil and Gas Sector.”

The regime’s strength comes from perpetual crisis. The narrative that they use to justify their existence is to stop the intervention of the “arrogants,” those countries of the West that are always meddling. For all the talk that Trump ordered this attack in order to draw attention away from other issues, the Iranian regime has even greater reasons to foster ways of drawing attention away from their domestic failures. The regime longs for fresh martyrs — and United States just gave them one of the best they have ever had to galvanize its supporters.

As of the time this was written, it appears that both the U.S. and Iran are eager to ramp down the tensions or, at least, to delay the escalation toward a full out war. But make no mistake. Even though Iran and the U.S. have stopped before going over the edge of a cliff, one misstep could send both into the abyss of war. And what would the best result be of such a costly conflict? Take a look at Iraq for a hint.

If the United States wants to foster peace in the middle east there is a better way. Trump may have sensed the possibilities when he said in Saudi Arabia that he looked for, “the day when the Iranian people have the just and righteous government they deserve.”

Such a government will never come through the military intervention of an outside power. It must come from within.

The ayatollah can’t be bombed out of power. Such attacks only would strengthen his position and enable him to further crush opposition at home while enriching the regime’s power elite.

Notwithstanding the regime-approved tears many have shed in staged funeral processions, the vast majority of tears shed in Iran are silent prayers for change. The protests against the regime over the last months have been broken up by violence.

As Trump mentioned in his speech on Jan. 8, approximately 1,500 people have been killed as they demonstrated for a more democratic government. The killing of Soleimani has not helped their position. A week ago the crowds were burning the picture of the Ayatollah. Now different crowds are burning the American flag.

Fortunately, many in those funeral crowds are not supporters of the regime. They may honor Soleimani as a war hero in the Iran-Iraq war and for his fighting ISIS, but still want the regime to go.

“We want you to have a future and a great future,” Trump said to the Iranian people after the Jan. 7 missile attacks, “one that you deserve, one of prosperity at home, and harmony with the nations of the world. The United States is ready to embrace peace with all who seek it.”

That future is possible if America will foster the rising will of the Iranian people to create a new and democratic government. Actions, even if justifiable in the short term, need to be carefully examined to make sure they weaken the regime and help embolden the democratic aspirations of Iran’s people.

Khosrow B. Semnani, an Iranian-American philanthropist and Utah resident, is the author of “The Ayatollah’s Nuclear Gamble,” and “Where Is My Oil? Corruption in Iran’s Oil and Gas Sector.”