By Khosrow B. Semnani and Amir Soltani, For The Washington Times. Published: Monday, Feb. 24, 2020

The Islamic Republic of Iran is a failed state

In response to President Trump’s escalation of tensions with Ir 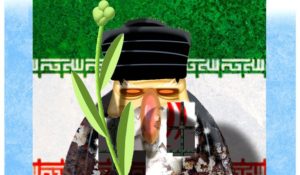 an, the Senate voted on Feb. 13 to require the president to seek congressional authorization for military action against Iran. Mr. Trump himself has claimed that he wants a better Iran nuclear deal — not a war with Iran. But his demands that Iran permanently curb its nuclear ambitions, restrict its ballistic missile program and stop destabilizing the region have fallen on deaf ears. So have his reassurances that the United States does not seek regime change.

What then is the way out of the Iran crisis? The Iran nuclear deal is dead. An Iran war is out of the question. And a more comprehensive and complex agreement is impossible to envision, secure and enforce.

With U.S. presidential elections around the corner, Iran’s supreme leader is in no rush to boost Mr. Trump’s electoral prospects. This was reinforced in a meeting last year between Japanese Prime Minister Shinzo Abe and Ayatollah Ali Khamenei. Mr. Khamenei stated, “I don’t regard Trump as deserving any exchange of messages and have no response for him and will give no response.” He further stated, “What Trump says — that he is not after regime change — is a lie. For, if he could do so, he would. However, he is not capable of doing it.”

The ayatollah may be right.

Change in Iran cannot come from the outside. But it is coming from the inside.

From the hostage crisis to the nuclear crisis today, Iran’s revolutionary clerics have used foreign policy — enmity with the United States and hatred toward Israel — as the key to survival at home. The price of their foreign policy — the tab for fundamentalism, tyranny, corruption and terrorism — has stunted Iran’s growth, decimated its economy and shattered Iran’s security.

That formula has ceased to work.

After 40 years of anti-Americanism, Iran’s revolutionary clerics — boosted by their apologists from liberals like Jimmy Carter to socialists like Bernie Sanders — can no longer scapegoat the late shah of Iran, let alone fool the Iranian people with a “Blame America First” strategy. The nuclear crisis is a symptom of a theocracy in meltdown. The cause of the crisis is the theocracy’s democracy deficit wherein a kleptocracy plunders Iran’s resources behind the veil of religion.

Today, the need for structural change in Iran is not a matter of theory, but a practical imperative — a matter of national survival and, one might add, the key to reframing American foreign policy in the region.

The rift between state, religion and society has never been greater. The schisms within Iran’s religious establishment and the factional divisions among Iran’s political oligarchs have exposed a massive crisis of legitimacy. The promise of reform from within has collapsed. Parliamentary and presidential elections are rigged to silence the people and snuff out the truth. The system deflects blame for its defects on others and does so in the face of compounding political, military and economic crises. Look no further than the lies surrounding Iran’s recent downing of a Ukrainian airliner.

The human toll of the regime’s ideology and policies inside Iran is unfathomable — oil exports are almost zero. The economy, already decimated under Mahmoud Ahmadinejad, is contracting at a 9.5 percent annual rate, according to the IMF. Iran’s Statistical Center has predicted a 50 percent rise in prices in 2019 compared to the previous year. Prices for daily consumer items have risen over 80 percent. In a country where the monthly minimum wage is $110, workers at factories across Iran are cheated out of their salary and then brutalized for revolting against injustice. Forty percent of university graduates are unemployed. Addiction, depression, divorce and suicide are fraying Iran’s social fabric as never before. To divine the Islamic Republic’s future, look no further than the ayatollah’s shoot-to-kill policy — a response to nationwide protests against a three-fold spike in gasoline prices last November.

Like Venezuela, the Islamic Republic of Iran is a failed state.

The credit for that failure does not go to Mr. Trump. It goes to the ayatollah. He is waging the real war on the Iranian people.

This is not the moment for Iran policy to become hostage to partisan bickering. Democrats and Republicans deserve credit for reducing the risks of an Iran war. They have made it harder for the ayatollah to escalate the nuclear and regional crisis to provoke the United States into a war. But Mr. Trump and Secretary of State Mike Pompeo also deserve credit for rejecting an Iran deal that fails to contain the regime’s regional and military interventions. It is reckless to leave America and its allies — including the Iranian people — hostage to an ideological threat.

Change is coming to Iran as surely as it did to the Soviet Union, Eastern Europe and South Africa. Our fixation on Iran’s nuclear program should not blind us to tectonic, demographic, political and economic shifts that signal the end of clerical rule in Iran.

The passion driving the Iranian people forward on their path to a constitutional democracy has deep roots dating to 1906. The revolution of 1979 — Khomeini’s religious coup — is a detour, not the destination.

Instead of being provoked into an Iran war or seeking a nuclear deal premised on the sacrifice of democracy and human rights in the crucible of fundamentalism, let us stand by the Iranian people. Their triumph over an ayatollah who equates the fundamentals of religion with tyranny and terrorism will not only break the nuclear impasse, it will advance our ideals and interests by ushering in an era of freedom, prosperity and security across the region.

Instead of embracing fear and pessimism, let us summon our spirit to secure a future worthy of our great democracy — an Iranian Spring.

Khosrow B. Semnani is an Iranian-American industrialist, community leader and philanthropist. He is the author of “Where is My Oil? Corruption in Iran’s Oil and Gas Sector.” Amir Soltani, a human rights activist, is the author of “Zahra’s Paradise,” an award-winning graphic novel on Iran’s 2009 protests.