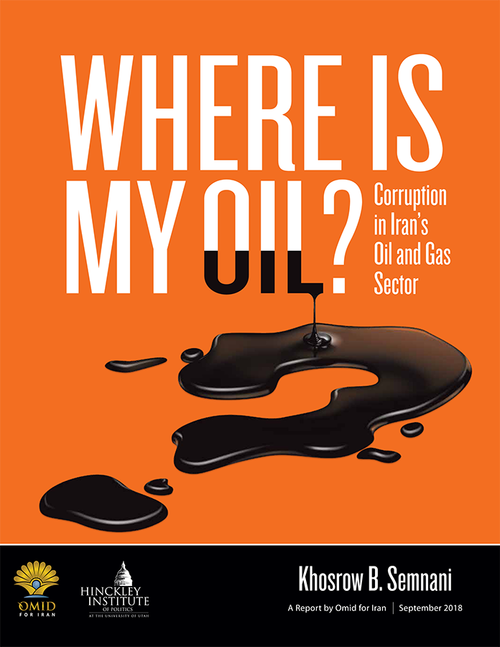 The Islamic Republic continues squandering Iranians’ most vital resource: the energy that could drive their prosperity and fuel their future.

Washington D.C., October 30, 2018 — As Iranians experience a deteriorating economy, sinking currency, and rising joblessness, a new study published by Omid for Iran and the University of Utah’s Hinckley Institute of Politics lays out a clear and devastating case of widespread corruption in Iran’s oil and gas sector. This corruption led to the loss of more than $1 trillion to the wider economy during the Ahmadinejad presidency alone and continues to contribute to the ongoing suffering of the Iranian people.

“Where Is My Oil? Corruption in Iran’s Oil and Gas Sector” shows how “corruption by design” plagues Iran’s oil and gas industry, enriches members of competing “oil mafias” and elites close to the government, while endangering the future of Iranians. Authored by prominent Iranian-American business leader and philanthropist, Khosrow B. Semnani, with a supporting group of specialists under the independent, not-for-profit organization, Omid for Iran, the report paints a picture of an oil and gas industry under siege by “a persistent system of corruption” that has led to dramatic underperformance of the Iranian economy.

The report demonstrates how most of Iran’s economic and social ills are created or made much worse by the Islamic Regime’s oil and gas policies. “Problems with education, jobs, healthcare, addiction— these are all just symptoms,” Semnani says. “The pain Iranians go through is to accommodate the conditions for Iran’s oil and gas industry to be purposely twisted, which allows theft on an unlimited scale. Even sanctions play into pre-designed plans to make it easier to steal.”

“The oil mafia’s fingerprints are everywhere,” the report notes. “Under the cover of religion, corruption has taken the form of abuse of power, nepotism in appointments, bribery and kickbacks, divulging secret information, rigging bids, improper vetting of contracts, illegal allocations of oil, sale of discounted oil, foreign currency transfers, purchase of phantom rigs, illegal and authorized withdrawals from accounts, suppression of reports, audits and investigations, judicial whitewashing of corruption cases and the amputation of legal and religious principles for the sake of expediency. To this day, the movement of entire tankers carrying unknown volumes of oil remains shrouded in mystery.”
2 of 2

Deploying a social accounting matrix (SAM) multiplier model from Iran’s own Parliamentary Research Center, the author shows the devastating and real impact of missing oil revenues on the lives of ordinary Iranians.

“After the disputed 2009 elections, Iranians began chanting: ‘Where is My Vote?’” Semnani said in describing the reason for his most recent report. “What they should also be chanting every day is: ‘Where is My Oil?’” he explained. “Iranians need to have a serious conversation, on a daily basis, about ownership of their most important natural resources, and I hope this report will contribute to that debate.”

Semnani also said he deeply respects the technocrats who built Iran’s oil and gas industry as well as those who still labor in Iran to do the right thing. “In many ways, this report is for them, as well as all of the Iranian people. I have tremendous sympathy for the Iranian people who are suffering from consistently bad policy choices made by their government as well as the overwhelming corruption that robs them of the better future they so richly deserve.”

“Where is My Oil?” represents a clear-headed call from a prominent Iranian-American to all Iranians worldwide and those who love and support the future of the Iranian people to take a closer look at the tremendous damage wrought by corruption in Iran’s oil and gas sector.

Omid For Iran is a nonprofit organization which aims to improve the lives of ordinary Iranians by promoting individual freedom, empowering civil society and advancing good governance. See www.omidforiran.org.

The Hinckley Institute is a nonpartisan institute at the University of Utah dedicated to teaching civic responsibility. See www.hinckley.utah.edu.

The report will be available for the public to download on Oct. 30, 2018 at WhereIsMyOil.org. Selections in Persian will also be available for download, with the full translation to follow later.